Warning: "continue" targeting switch is equivalent to "break". Did you mean to use "continue 2"? in /homepages/17/d98072661/htdocs/BigCanoeFun1/wp-content/plugins/revslider/includes/operations.class.php on line 2851

Warning: "continue" targeting switch is equivalent to "break". Did you mean to use "continue 2"? in /homepages/17/d98072661/htdocs/BigCanoeFun1/wp-content/plugins/revslider/includes/operations.class.php on line 2855

Warning: "continue" targeting switch is equivalent to "break". Did you mean to use "continue 2"? in /homepages/17/d98072661/htdocs/BigCanoeFun1/wp-content/plugins/revslider/includes/output.class.php on line 3708
 Heritage | Big Canoe Fun

What’s in a Name?

There are two theories on the origin of the term “canoe.” Some believe that the word originated as the Arawakan word, “canoa,” and was later Anglicized as, “canoe.” Another theory suggests that the term is derived from the word kenu or kanu which means “dugout.” 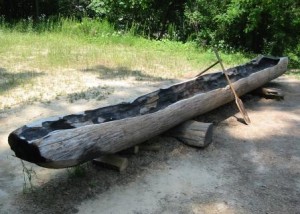 Canoes have a rich heritage and a very long history. No one knows exactly when or where the first canoes were made or used, but they’ve been around for thousands of years. Several years ago, archeologists uncovered the remains of what of a dugout they believe to be 8,000-years old. Although now considered recreational, canoes were used as a primary means of transportation for many cultures throughout history. Clues from the history of Native American canoes can help us understand where modern canoe designs come from. In North America, the very first canoes were used by the indigenous people of the Caribbean to travel between the islands.

Over the past few centuries, canoes have evolved from dugout logs to high-tech craft made from composites. Native Americans advanced canoe design tremendously when they developed Birch bark canoes. These canoes could haul a tremendous amount of cargo while handling all sorts of conditions such as quiet waters, open lakes, quickly-moving rivers and coastal waters. The Birch bark canoe was perfect to navigate North American waterways. 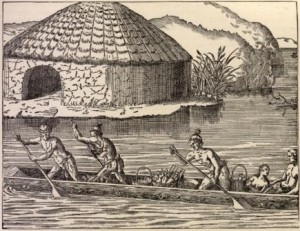 As soon as European explorers came to North America, they found canoes tremendously useful and started using them. In fact, the Europeans were amazed with the advanced engineering skills employed by the Native Americans who designed these canoes. Instead of simply hollowing out logs, these canoes were framed and constructed of multiple types of wood and held together with resins from trees.

In 1603, Samuel de Champlain first recorded the dimensions of Native American canoes. He wrote that they measured up to 23-feet long with a 50-inch beam and carried up to 1,000 pounds of cargo. The French used canoes to establish the fur trade and to explore what we now call Canada and the mainland United States.

Native North Americans are responsible for creating the version of the canoe we are most familiar with today – a wooden frame covered with tree bark (usually birch, but sometimes elm or cedar). These canoes are ideal for traveling the rivers, streams and lakes of North America and have remained virtually unchanged for thousands of years. Birch bark is ideal for canoes because it’s lightweight and smooth as well as waterproof and resilient. Birch trees are also abundant throughout Canada — except for the western subarctic region — where Spruce trees were used as a substitute for Birch. Canoes were tied together with Pine tree roots and their seams sealed with Pine resin to make them waterproof.

The fur trade in North America grew quickly and with it, so did the need for canoes. The fur trade grew so large that, in 1750, the French built the first known canoe factory at Trois-Rivieres, Quebec. Many of the canoes used by fur traders would carry a crew of up to 12-people and almost 3-tons of cargo.

Brigades of canoes left Montreal each spring around the First of May and would reach the west end of Lake Superior by mid-June with supplies and passengers headed to the forts and posts. The largest canoes, called canots du maître (Master Canoes) were between thirty and forty-feet in length and usually traveled in brigades of five. Each canoe had a bowman guiding the canoe, less experienced middle men paddling the boat, and a stern paddler who would stand or sit at the back and steer on instructions from the bowman. The canots du nord (North Canoes) were slightly smaller canoes that were used to go further west of Lake Superior. The North Canoes were typically about 25′ long and carried a crew of 5 with supplies and provisions. The men who traveled in these canoes were called, “Voyageurs.” 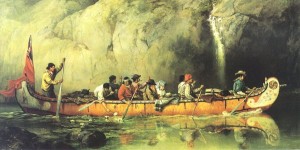 Voyageurs were well-known for their strength, endurance and incredible speed paddling a canoe. Starting before sunrise, they maintained a pace of about 45 strokes per minute — traveling about 6 1/2-miles every hour and around 100-miles per day. Voyageurs sang songs to keep a rhythm in their paddling and would take breaks every hour so the men could smoke a pipe. Without regular breaks, there was no way they would be able to maintain their pace. Because of their regular smoke breaks, distances came to be measured in terms of pipes. A lake that took three-hours to cross would be called a, “Three-pipe lake.” Voyageurs typically paddled that far — 12 to 15-miles — before breakfast each day.

How Much Could Voyageur Canoes Carry?

The Voyageurs’ canoes could carry trip provisions, personal items, tools, repair material and up to 65 bundles of goods to sell or trade. In addition to the weight of the cargo, the canoe itself weighed 300 lbs or more. With each bundle weighing around 90 lbs, the total weight the Voyageurs would have to carry on portages was close to 6,000 lbs. These large canoes were a major part of trade and transportation in the early days of America.

Our Clipper Voyageur Canoes are modeled after the early North American Birch bark canoes.  To decrease weight and increase longevity our canoes are made from fiberglass.

The 25′ Voyageur canoe can easily handle up to 10-paddlers.  Modeled after the Voyageur Centennial canoe, the Voyageur characterizes a tried and true canoe design. The Voyageur can be paddled in many conditions from ocean to extended wilderness expeditions on large lakes. The straight keel line of the Voyageur gives it excellent tracking ability. Its slightly rounded hull shape will makes the Voyageur a very fast canoe. The Voyageur has been used extensively as a training craft for dragon boat racing and for corporate outings. As unlikely as it sounds, the Voyageur has even been used to pull water skiers! Just ask the Publisher of Canoe & Kayak Magazine.

The Voyageur has been paddled in many types of conditions. The Upper Thompson River in BC, rated at up to Grade III whitewater, has been run many times. Puget Sound is crossed regularly and Georgia Straight has been crossed between Nanaimo and Horseshoe Bay. One crossing saw breaking waves of 8 to 10 feet. The safety boats had returned to Nanaimo, but the Voyageur canoes wouldn’t be stopped.

In addition to the 25′ Voyageurs, we will also periodically employ a 29′ Clipper Langley (14-paddlers) to accommodate larger groups.

Large canoes are often referred to as “War Canoes,” particularly in articles written in the early 1900′s. Today, we often refer to them as “Big Canoes” encompassing the many 22′+ styles and shapes paddled in North America.

© Up The Creek Xpeditions and Big Canoe Fun. All Rights Reserved.