Paddling to Cumberland Island is a true Big Canoe Adventure! Paddling from the mainland over to Cumberland Island National Seashore, you’ll pass by the bluffs of Crooked River State Park and then through miles of salt marsh, as you ride the swift tidal currents of the Crooked River. Land on the island at the Plum Orchard dock and visit Plum Orchard mansion, a reminder of opulent days past. Then, either enjoy a picnic lunch on the grounds of the mansion, or walk across a true forest wonderland to miles of empty and undisturbed beaches. Sometimes referred to as, “The Cumberland Challenge,” this action packed day will give the participant a true sense of accomplishment.

Cumberland Island is Georgia’s largest and southernmost barrier island. The island has three major ecosystem regions: Salt marsh; Maritime forest; and, Beach and dune fields. Along the western edge of the island there are large areas of saltwater marshes lining the Intracoastal Waterway (ICW) and estuaries. As the marsh gives way to higher ground, trees and dense vegetation mark the maritime forest where one will see gnarled live oak trees covered with Spanish moss and the palmetto plants common in this area. Cumberland Island’s most famous ecosystem is its beach, which stretches over 17-miles. On this trip, we sometimes have an opportunity to get a guided-tour of Plum Orchard Mansion — which was built in 1898 for George Carnegie & Margaret Thaw.

This trip does not require previous paddling experience; however, it is physically challenging due to the various activities and length of the trip. The paddling portion is suited for beginner through advanced skill-levels. There is little protection from the wind, making this trip more challenging on windy days. The waters are tidally influenced, and this trip must be done with the tides. For this reason, this trip is only possible with morning ebb afternoon flood-tides.

Lunch is not included in the price of this trip but, for an additional fee, lunch arrangements may be made for this trip. A typical lunch will include: Sandwich; chips; fresh fruit and a treat. Water and snacks will also be provided, but it is always a good idea to bring extra water and anything else you think you may want to eat, drink or have on hand once you get to the island. We may be able to accommodate special requests or dietary restrictions if needed. Book Your Big Canoe Adventure Now.

Located just 15-minutes from the Historic St. Marys Waterfront, Crooked River State Park is a favorite destination for paddlers and campers seeking the complete Coastal Georgia experience. Featuring both hiking trails and paddling trails, visitors are given full access to the maritime forest and marsh habitats that dominate this part of the Georgia coast. Crooked River State Park is not only the preferred launch-site for paddlers heading to Cumberland Island, it’s also home to one of six paddling trails making up the Georgia State Park’s Park Paddlers Club.

The Cherry Point Paddling Trail at Crooked River State Park is a 4-mile loop that takes paddlers approximately 2-hours to complete. The trip puts-in precisely 90-minutes before low-tide and proceeds east past the driftwood covered beaches and bluffs of Crooked River State Park and into the salt marsh. About a mile into the trip, paddlers turn south and are met with a view of the buildings on the Kings Bay Naval Submarine Base waterfront. Stingrays are commonly seen along the shoreline on this part of the trip — as are dozens of large wading birds and circling wood storks.

Osprey and Bald Eagles are often seen catching fish in the river on this trip; and it isn’t unusual to see dolphins and sharks eating shrimp and bait fish along the edge of the marsh. After rounding the point and putting the navy base behind us, there are several sandbars exposed for a brief break before riding the rising tide back to the take-out. Passing by the bluffs along the north border of the park, paddlers are treated to striking scenery and a swift ride. The erosion along the bluffs is evidence of the power and speed of the current in this river. The Crooked River has the swiftest tidal currents in the area, so paddlers must plan trips carefully according to the tides. Though the State Park has designated this trail as a self-guided trail, coastal paddling — especially in the Crooked River — is not something beginners should attempt without instruction.

For camping reservations or other information about Crooked River State Park,
contact them by telephone at:
Reservations 800-864-7275
Park 912-882-5256 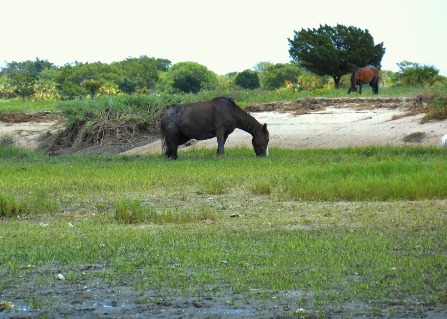 This trip is an Island-hopping escape. Leaving from the North End of Amelia Island and crossing the Cumberland Sound, the Horse Creek trip is sure to please those seeking a bit more adventure on their paddling trip. Though it is a short paddle from  the Dee Dee Bartels boat ramp, the crossing from Amelia Island to Cumberland Island can be quite exciting. Heavy boat traffic (including the occasional nuclear submarine), strong currents and big seas require the ability to paddle vigorously in conditions. Afternoon winds on the Cumberland Sound always make for an interesting paddle.

The South-End Adventure departing  from St. Marys and can be anywhere from 5 to 7-miles, depending on where we land on Cumberland Island. Though a much longer paddle, this trip avoids the biggest part of the Sound while giving us access to the same part of the island. The trip over takes approximately 2-hours and then, depending on where we land, there could be a couple more hours of walking and exploring before climbing back into the canoes for a 2-hour return trip. These trips are a full-day of activity, but both offer priceless moments of solitude as you relax on a deserted beach.

These Cumberland Island south end trips are ideal island getaways for nature lovers. There are no Mansions or Ruins on the remote south end; just undisturbed flora and fauna enjoying parts of the island only accessible by water. Horses and crabs share the south end cut trail with visitors hiking between the maritime forest and the beach. Vast marshlands filled with grazing wild horses and a variety of feeding birds offer a stark contrast to the massive guns atop the walls of Fort Clinch just across the channel guarding the entrance between Amelia and Cumberland. Whether alone on miles of white sand beach, or wandering through the dunes or maritime forest, this trip offers coastal barrier island beauty at it’s most pristine.

Lunch is not included in the price of this trip, but for an additional fee, lunch arrangements may be made for this trip. A typical lunch will include: Sandwich; chips; fresh fruit and a treat. Water and snacks will also be provided, but it is always a good idea to bring extra water and anything else you think you may want to eat, drink or have on hand once you get to the island. We may be able to accommodate special requests or dietary restrictions if needed. Book Your Big Canoe Adventure Now.

A Little About the Area

St. Marys has been described at different times over the centuries as a bustling seaport, a sleepy tourist resting place or a strategic military location.

The city of St. Marys is located on the St. Marys River within six-miles of the Atlantic Ocean — making it an important port town for the shrimping industry.

Close to the Georgia-Florida state line (on Route 40, off Interstate 95), the historic city is located on the St. Marys River, which represents the border between Georgia and Florida for its entire length. St. Marys served as Camden County’s seat from 1869 until 1923. Today many of its residents earn their livelihood by catering to the tourists who visit Cumberland Island National Seashore and the St. Marys National Historic District, which includes beautiful nineteenth-century buildings, offices, and shops and the Oak Grove Cemetery. According to the 2010 U.S. census, the population is 17,121.

Established on the site of an abandoned Timucuan Indian village, Tlathlothlaguphta, St. Marys sits on land confiscated from two brothers of royal governor James Wright. Their Royalist sympathies resulted in their banishment after the American Revolution (1775-83) and the loss of their huge estates.

The history of the town’s name is not clear. Accounts differ regarding the origin of the name itself—some say it is named after the St. Marys River, while others say it comes from a seventeenth-century Spanish mission, Santa Maria, on nearby Amelia Island, Florida. (Histories also differ regarding whether the new town was known as St. Patrick’s for a few years—until 1792—or whether that name actually referred to another town close by.) After the departure of its royalist owners, the land belonged to Jacob Weed, an early planter and state legislator. Weed sold 1,672 acres along the St. Marys River to nineteen other men, and the twenty laid out the new town together in 1788. Early maps show the streets were 100 feet wide, interspersed with two 16-acre public squares. Each one of the twenty founders was authorized to use the squares and received a mixture of good, marshy land in his purchase.

Soon after the town was laid out, the area became home to Acadian refugees (later called Cajuns). The French-speaking Acadians, having been deported from Canada by the British, had settled in many places, including the French colony of Saint-Domingue on the Caribbean island of Hispaniola. Some fled Toussaint L’Ouverture’s slave rebellion there, arriving in St. Marys in 1791. St. Marys was established by an act of the state legislature on December 5, 1792. It was not officially incorporated, however, until November 1802.

The strategic location of St. Marys on the Atlantic Coast just above Florida led to its involvement in several of the major military conflicts in U.S.history. Troops were sent from New York to the area during the American Revolution. It was captured by the British during the War of 1812 (1812-15), and Union gunboats shelled its waterfront buildings during the Civil War (1861-65). Its military connections have continued with the establishment of Kings Bay Naval Submarine Base. (Cooksey, Elizabeth B. “St. Marys.” New Georgia Encyclopedia. 03 September 2013. Web. 04 October 2013.)

Paddling on the St. Marys River, along the marshes and through the harbor, it is easy to imagine St. Marys as it was all those years ago. Paddlers are able to follow in the wake of the ancient Native Americans who paddled these same waters in large dugout canoes; and paddlers still share the water with merchant ships — as well as warships. Dolphins and Otters are common sights in the St. Marys, as are shrimp boats — and an occasional nuclear submarine at the mouth of the river as it heads out or returns from patrol. The marinas on the east and west sides of the St. Marys harbor are favorite spots of visiting manatees, and make for ideal postcard photos of sunrises and sunsets as seen from a War Canoe or the cockpit of a kayak.

The St. Marys waterfront is the launching and landing point for several paddling excursions. The Harbor Tour, one of our most popular trips, is a 2-hour, 4-mile loop featuring waterfront scenery, salt marsh and a chance to see resident River Otters. Rose’s Bluff is a slightly longer course that takes paddlers through a narrow gap in the marsh and into the Bells River in Florida. The 3-hour, 6-mile route carries paddlers past steep bluffs as it curves back around to the St. Marys River. On outgoing tides, paddlers with open water paddling experience are able to paddle from St. Marys to the southern end of Cumberland Island. The route crosses Cumberland Sound and the Intracoastal Waterway (ICW) and must be carefully planned with the tides. Tidal currents in the Cumberland Sound are swift and dangerous; and paddlers attempting this trip should have experience with open water rescues.

© Up The Creek Xpeditions and Big Canoe Fun. All Rights Reserved.